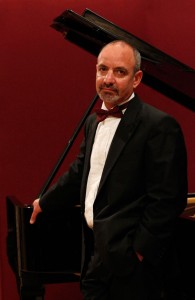 Yiannis Georgiou was born in London. He spent his childhood in both Cyprus and in England where he attended the Royal College of Music Junior Department.
He studied at Trinity College of Music in London, with Alexander Ardakov and John Bingham, where he received numerous competition prizes and graduated with the DipTCL Performer’s Diploma.
He continued his studies in Moscow, at the Tchaikovsky Conservatoire, initially with Professor Valery Kastelsky, a student of Heinrich Neuhaus, and finally with Pavel Nersessian, He graduated with the Aspirant Diploma. Yiannis Georgiou is the only Cypriot Pianist to have received this award.
Yiannis has performed as a soloist in the UK, Greece, Cyprus, Spain, Switzerland and Germany.
Yiannis Georgiou has been living in Cyprus since 2004.